The Chief Engineer was an officer stationed on a Union vessel who functioned as the head of all engineering issues and supervisor of all junior Engineering section officers. The position was normally filled by an officer of Lieutenant Commander rank; junior officers tended to be Lieutenants and Ensigns.

The Chief Engineer was stationed in the Engineering section of the ship next to the quantum drive, although their duties could take them to the Bridge or elsewhere on the ship as needs arose.

Among the responsibilities of the Chief Engineer was an analysis of the dysonium field condenser, a task which is performed once every month. Officers considered the task to be rather easy and one that could be carried out by even first-year cadets, according to Kelly Grayson. Chief Engineer John LaMarr considered the task to be boring and tiresome.[1]

John LaMarr
Add a photo to this gallery 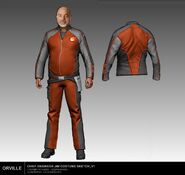 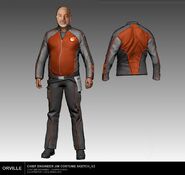 Retrieved from "https://orville.fandom.com/wiki/Chief_Engineering_Officer?oldid=26560"
Community content is available under CC-BY-SA unless otherwise noted.