Commanders serve alongside the Captains of their assigned vessels, often acting as First Officers. Commander ranks below Captain and above Lieutenant Commander.

Commanders are the second highest rank available onboard Planetary Union vessels. They spend their time on the Bridge seated in equal standing to the ship's Captain advising and informing them on the vessel's necessary objectives. For this reason their authority within the ship is held in high regard by all the crew. Commanders assume the powers and authority of Captain in times they are either incapacitated or otherwise missing in action.

Strictly speaking, most if not all Union officers of a higher rank seen would have been Commanders. The following are those who are definitively seen as such. 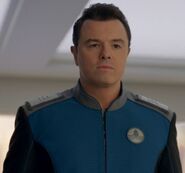 Kelly Grayson
Add a photo to this gallery

Retrieved from "https://orville.fandom.com/wiki/Commander?oldid=20173"
Community content is available under CC-BY-SA unless otherwise noted.