Researchers from all over the galaxy petition to work there.— Ed Mercer[1]

The Epsilon Science Station is a Planetary Union center for advanced research on the colony planet Epsilon 2. The current Director of the facility is Doctor Aronov.

The station hosts researchers from many different scientific fields independent of governments or enterprises, allowing them to conduct their research unencumbered.

The station houses numerous scientific laboratories and "sustained-research environments,"[2] including a Botany Lab and a center for the study of temporal fields. For that reason, the station is often called "The Scientists' Playground."

The advanced research led to interest from enemies of the Union. The Krill military managed to seed an undercover operative within the facility in 2418 and raided it a year later.

In September, 2419, the USS Orville receives orders to deliver essential supplies to the facility. Upon arrival, Doctor Aronov shows the Orville's ground team that the facility has developed a machine capable of generating a quantum bubble around an object, where time inside the bubble is accelerated dramatically.

However, one of the researchers, Derek Ashton, is an agent for the enemy Krill. Seeing that the window to seize the device for the Krill is closing quickly, Ashton summons a Krill destroyer to raid the facility. Krill soldiers storm the station but fail to find the device, as the Orville ground team and Aronov managed to abscond with the device back to their ship.

The Orville destroys the Krill destroyer, the Epsilon Science Station is safe, and Aronov returns to his old position.

To create the set of the Station, the production crew simply built the station on the empty set of the Orville's Mess Hall, as the set had the best acoustics for filming. Because the writing staff completed the pilot script very early in the show's history, production of the science station began well in advance.[3] In the original pilot script, the Station was called both the "Epsilon 2 Research Facility" and the "Epsilon 2 Science Station."[4]

After filming, much of the props of the Station were put into storage. In September 2019, editor and associate producer Tom Costantino Tweeted a picture of the direction sign to the facility (seen behind Ed and Alara when he asks her to "open this jar of pickles"), which shows the sign is damaged and covered in painter's tape.[5] 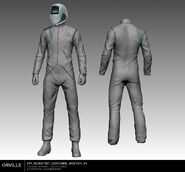 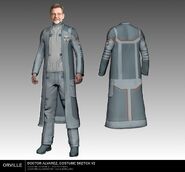 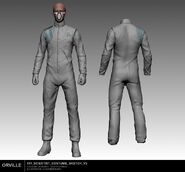 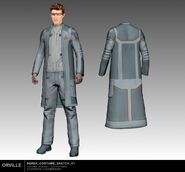 Retrieved from "https://orville.fandom.com/wiki/Epsilon_Science_Station?oldid=20390"
Community content is available under CC-BY-SA unless otherwise noted.