This article is about the species. For the episode, see Krill (episode).

Krill
The Krill were an aggressive, reptilian species from a planet of the same name, located in the same quadrant of the galaxy as the Planetary Union.

Krill society was ruled by an extreme theocratic government[1] dominated by the worship of an omnipotent vengeful creator god named Avis who commanded the destruction of all non-Krill through "the divine fight," a state of perpetual conflict.[n 1] The majority of Krill viewed other species as soulless and unworthy of life. Thus, they were in conflict with virtually all other species.

Because Krill territory abutted Union space, they were the Union's primary antagonists of the early 25th century until the landmark Lak'vai Pact of Tarazed 3.

The Krill were not always so extreme in their religious beliefs. According to Captain Ed Mercer, the Krill were much less "fanatical" adherents prior to achieving space flight and first contact with other worlds.[2] Only after the Krill discovered they were "just one species among a vast diversity of life forms," did the Krill "ratchet up their xenophobia."[2]

Krill were a bipedal reptilian humanoid species. They had tough, scaly skin with three bony ridges running along their skulls. Their height and strength are roughly the same as humans. Males had two bone protrusions from the base of their chins, called "chin horns."[n 2]

There were at least two Krill phenotypes. The first had pale white skin with entirely black eyes.[n 3] The second had blue-grey skin with black irises and white sclerae.[n 4] The Krill homeworld, also called Krill, was covered in a shroud of darkness; and evolutionary adaptation to that environment had caused the Krill to be vulnerable to even mild exposure to the ultraviolet radiation in lights and sunlight.[3]

All observed Krill had the same slender physique. Lieutenant Unk briefly mentioned that Krill women can be "chubby," though the extent to which that is only prurient fantasy is unknown.[4]

As a whole, politics were shaped by a supremacist interpretation of Krill religion, although the Union suspected progressive movements existed "within the Krill power structure."[5]

A lak'vai pact was a joint resolution between two parties with a statement of goodwill and an intention to conduct open treaty negotiations in the future. A lak'vai was not a ceasefire, but initialized peace talks.[6]

One notable example was the Lak'vai Pact of Tarazed 3 between the Krill and the Union, signed by Ambassador K.T.Z. and Captain Ed Mercer.[6]

The Krill religion revolved around the worship of a supreme deity named Avis, whose stories and philosophy were recorded in the Anhkana, the Krill sacred text. Avis created the Krill independent of all other life and granted dominion over all things in the universe to them. All other life life was soulless and thus unworthy of existence.[2] Even complex species were regarded as non-sentient, their actions compared by the Krill to the generated responses of an advanced computer.[3] Avis commanded the destruction of all other godless life.[2]

Krill gather for services, religious rituals, inside rooms or buildings known as chapels. Chapels may be found throughout the Krill home world and in their destroyers. Services were led by a high priest, flanked by two priests.[3]

A basic chapel consisted of a single room with an altar at its center-front; a copy of the Anhkana and a ceremonial bell rested on the top of the altar. Two rows of pews flanked the sides of the room, separated by a single center aisle. The walls of the chapel were adorned with Krill writing proclaiming belief in Avis.[n 5]

At the start of services, the priest opened services by twice ringing the ceremonial bell and greeting the congregation: "A blessed evening. Temeen Everdeen."[n 6] Congregants replied, "Temeen everdeen."[3]

The Krill military was an extension of the society's religion, and participation in the military was known as joining "the divine fight" against other lifeforms.[n 1]

The Krill operated warships called destroyers for military operations. Destroyers were led by a captain in charge of all operations aboard the ship. The captain was assisted by a high priest who oversaw religious affairs. Some destroyers may self-cloak.

There were at least two tiers of Krill military rank: the captain in command of a destroyer and the soldiers who comprised the bulk of the Krill force. Soldiers were highly trained for hand-to-hand and weapon-based combat. Soldiers were in charge of minor operations, enforcing the commands of leaders aboard destroyers or leading ground teams on military strikes.

Krill armor was durable yet flexible, having the same toughness as their rifles.[7] Armor covered nearly all of the body of a soldier, although it was not entirely for protection in combat; because Krill were extremely sensitive to light, the armor blocked out deadly ultraviolet radiation. When on the surface of well-lit worlds like Epsilon 2, Krill soldiers wore helmets that guard the face at all times possible. The helmets opened and retracted automatically.

Krill used electrified batons as an instrument of torture on prisoners, which had at least nine levels of intensity to hurt the victim. It is assumed that higher levels were extraordinarily painful and harmful as the Krill themselves were only able to survive up to level eight.[2]

Captured enemies were temporarily stored in the brig of a ship,[2] but long-term captives such as Orrin Channing were held in prisons.[6]

The Krill were hostile towards non-Krill species of space, raiding or attacking other civilizations such as the Planetary Union and the Chak'tal. The Krill-Chak'tal conflict erupted when the Krill attacked Chak'tal colonies, and the Chak'tal launched a punitive campaign in retaliation.

From at least the 24th century until the early 25th, the Krill were adversaries of the Planetary Union, a longstanding hostility known as the Krill-Planetary Union conflict. The Union was careful to avoid an official declaration of war. As Admiral Ozawa elaborated, the Krill saw a declared war with the Union as "a holy crusade," which meant it would last decades.[3]

From 2418 through 2419, the Krill converted Doctor Derek Ashton into a spy, and with his help nearly captured a sophisticated quantum-field technology known as a quantum accelerator, a device capable of rapidly aging anything within a "quantum bubble." They were stymied by the USS Orville in the Battle of Epsilon 2.[8]

The Krill peppered Union colonies with military raids throughout 2419. The destroyer Yakar conquered the colony of Chara 3 and killed its settlers.[3] Later, a different, unnamed destroyer attacked the USS Druyan, but was defeated by the intervening Orville.[9] Around December, the Kakov attempted to raid the colony planet Kastra 4 but was destroyed by the Orville. Dozens of Union settlers were confirmed killed.[3]

Captain Ed Mercer and Helmsman Gordon Malloy captured the Yakar in late 2419 - killing most of its crew and taking its schoolteacher, Teleya, captive.[3] Teleya escaped prison in early 2420 and rejoined the Krill (although how she managed to accomplish that is unknown).[10] The military seeded Teleya into the Union as "Janel Tyler," a dark matter cartographer.

In late 2420, Talla Keyali served aboard a ship that had their "butts kicked" by the Krill.[11]

A turning point in Krill-Union relations came when the Kaylon launched a campaign to eradicate all biological life in the galaxy in January 2421.[12] The Kaylon sent a war armada to attack the Union's headquarters at Earth, but First Officer Kelly Grayson and Gordon were able to send an advance warning to the Krill. With a common threat, the Krill successfully aided the Union at the Battle of Earth in February.[13]

The Krill and Union signed a ceasefire agreement soon after the battle, followed by the Lak'vai Pact of Tarazed 3 signed in March.[6]

Krill used dedicated broadcast frequencies for communications and distress signals that other civilizations identified as distinctive to the Krill.[2]

Krill children were educated in space vessels such as destroyers, exposing the children to warfare on the ship and indoctrinating them into the Krill's military society. A classroom consisted of roughly a dozen pupils led by a single teacher.

Some Krill women chose a life of dedicated child-rearing.[14]

Unmarried Krill women had maiden names before they adopt a new name at marriage. One such maiden name is Kalavus, belonging to the mother of Ambassador K.T.Z.[6]

Years before The Orville was greenlit, creator Seth MacFarlane envisioned an alien species of religious extremists that viewed all other life as inferior.[15] His vision evolved into the "Krill:" a highly religious species and a metaphor of fundamentalist religions on 21st century Earth. As cinematographer Marvin Rush explained, "The Krill are very religious in a way for instance that ISIS or ISIL is. ... We're not saying this is the story of ISIS, we're not telling that story, but there's a corrupting effect that religion can have."[16]

Yet despite the fact that the Krill are the primary antagonists of the Planetary Union, MacFarlane was careful to show that the Krill are not wholly evil. During the premiere of Nothing Left on Earth Excepting Fishes, MacFarlane elaborated: "We wanted to create an enemy that felt threatening on the surface, but with an underlying humanity that we have to patiently unearth over time."[17] At San Diego Comic Con in 2019, MacFarlane stated that he wanted to make sure that "no alien species is 100% evil" in the show.

Design of the Krill was heavily influenced by the classic film Nosferatu. More specifically: their sensitivity to light and their vampiric appearance. Howard Berger, make-up department head for Season 1, recalled that "we did a series of design work on them - Seth [MacFarlane] said they're vampiric, they should be pale, black eyes and scary."[18] Yet MacFarlane originally envisioned simpler aliens with nose and forehead prosthetics and make-up. To convince the man that realistic, large-scale Krill costumes were possible, Berger dressed his wife and two men in his vision of the Krill in November, 2016 and presented them to MacFarlane. He was impressed and immediately approved Berger's idea.[19]

Krill costumes have three generic types: adult male, adult female, and child. Berger notes: "We came up with a male and female version and a child version because there's an episode [Krill] with children, and on that episode we ended up doing 111 Krill in eight days."[20] Only particularly important Krill characters received unique prosthetic masks, such as Chris, Haros, and Teleya.

Each costume is comprised of a prosthetic head, face, and chin piece, which are pre-painted to save time and then added to the actor.[21] Application of the prosthetic and blending them into the skin take roughly one hour per person.[21] 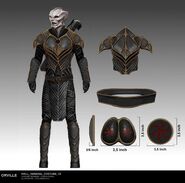 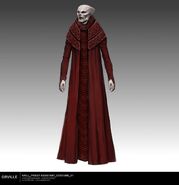 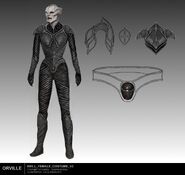 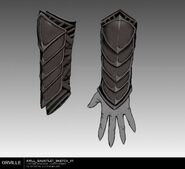 Retrieved from "https://orville.fandom.com/wiki/Krill?oldid=25677"
Community content is available under CC-BY-SA unless otherwise noted.