The Orville Wiki
Register
Don't have an account?
Sign In
Advertisement
in: Pages with reference errors, Moclans, Species, Languages
English

For generations, my people struggled to survive on a desolate world. It was only our culture, our traditions that sustained us. It is who we are.— Bortus[1]

Moclans were a humanoid species native to the planet Moclus.

Moclans were members of the Planetary Union, represented through a single government, and were one of the Union's most controversial members. They were known for their highly industrialized military complex, the sole supplier of weaponry for many races, but other Union species, most vocally the humans, saw its government's aggressive treatment of its female citizens as abusive.

The species was nearly entirely male, as the female sex was heavily discriminated against and surgical procedures were applied to any female at birth to convert them to male. The Moclan government claimed only one female was born every 75 years,[2] but the actual number was much higher. Bortus stated that a few were born every generation,[3] and Heveena suggested the number was even higher.[4]

Moclans aged far faster than other Union species such as humans. By eight months, a Moclan child could speak and attend school.[5] Gordon Malloy stated in 2421 that Bortus in 2414 was in the middle of puberty.[6]

I never cease to be impressed by the resilience of the Moclan body.— Doctor Claire Finn[7]

Moclans possessed light brown skin. Their most distinct feature were the cranial ridges and skin spots that ran along the sides and top of their head. Male Moclans sported skin spots only along the sides of their heads while those born females had them on their center ridge as well - even after a sex change.[n 1] Moclans are naturally hairless, but can be made to grow hair through the use of a follicle stimulator.[8]

Based on an internal image of Bortus' chest, Moclans seem to have had smaller hearts than humans.[9] A healthy heart rate was between 50 and 70 beats per minute.[10]

Moclan physiology was remarkably hardy. They could eat nearly anything due to the species having evolved to draw nourishment from a large variety of organic and inorganic matter, from a whole piece of wasabi to cactus plants, glass, napkins,[11] and forks.[12] Their bodies could withstand doses of radiation that would instantly kill any other species.[9]

The Moclan digestive system was very water-efficient, and adult Moclans urinated only once per year.[13]

Moclans reproduced by laying eggs. Bortus commented that laying eggs was "much easier" than Regorian and human childbirth.[14] Their gestation period was remarkably brief for such an advanced life form, only 21 days, and required the parent to sit on the egg until it hatched.[15]

Females were extremely rare in Moclan society, with it being claimed that one was born roughly every 75 years.[2] However, the true number was much higher: Bortus stated a few were born every generation,[3] and Heveena suggested the number was even greater.[4] The Moclan government almost always forcibly changed the sex of a female to male shortly after birth.

Young Moclans matured quickly, reaching the level of a human eight-year-old after about one year.[16]

Why the hell is dealing with Moclan culture always this difficult?— Captain Ed Mercer[17]

Moclan society was built around a highly developed military industry, which had led to a polluted atmosphere and near-constant weapons testing. The majority of the population lived in cities, though some - such as the author Heveena - dotted the mountains.[2]

The female Moclan sex was regarded with "disgust" and "shame" by a majority of other Moclans who believed women were physically and mentally incapable of fully participating in the species' warrior culture.[n 2]

Heterosexuality was uncommon in Moclan males, and attraction to females was criminalized with "a lifetime of imprisonment."[18] Heterosexual males, such as Locar, closely guarded their sexual proclivity from public knowledge. Locar noted that the "shame" of heterosexuality was borne by the family as well.[12]

Two Moclans romantically interested in each other could go on a gomaskah, a 'first date.' If the two continued to date, they became each other's kodashik, or 'boyfriend.' As the relationship deepened, the two could mate and create an egg. However, if the two broke up during the kodashik period, each kodashik extracted a tooth and gave it to the former mate. The former boyfriend then gave the tooth to his next kodashik who ate it.[12]

If a Moclan wished to divorce his mate, it was customary "to terminate the life of his mate."[19]

Moclans held a high appreciation of writers and their works, such as Gondus Elden. When they departed on a journey of great importance, it was customary for parties to quote a fitting passage from notable literary works.[2]

According to Locar, dancing was "much less restrained" than among humans.[12]

Names tended to be single, without a second name. The lone exception was author Gondus Elden.

Little is known of any historical Moclan religious belief, although evidently some Moclans believed in a soul.[22]

Bortus stated that some on Moclus believed in Da'klaya: "that one's fate is determined by the alignment of the stars on the day of his birth."[14] For believers, "some Da'klaya moons are more desirable than others."[14]

Justice was administered by tribunal, an arbitral method of dispute resolution or punishment. The head of a tribunal was a minister, and either side could be represented by advocates.[2]

The Moclan Science Division maintained a cadre of engineers, such as Toren.[24]

Relations with the Union[]

In the early 25th century, the Moclans had become the primary suppliers of weaponry to most Union member worlds.[24] Moclan engineers had a key part in creating and regulating Union deflector screen technology, as the regulations governing their use were written by Locar, a renowned Moclan engineer.[12] After the Kaylon declared war on the Planetary Union in February 2421, the Union increasingly depended on the Moclans for systems upgrades.

Moclus' treatment of their own females aggravated relations between the Moclans and the other Union species. When Bortus and Klyden disputed whether to change Topa's sex from female to male in November 2419, Captain Vorak hinted that he might have attacked the USS Orville had Captain Ed Mercer refused to allow Topa to go to Moclus.[2]

In 2421, a secret colony of Moclan girls and women was discovered. The Moclan government aggressively attempted to take the women back to their planet for sex reassignment surgery, and told the Planetary Union Council that if they were not allowed to take the females, they would leave the Union and ally with the Krill.[24]

Moclus seems to have operated a fleet independent of the Planetary Union.

A dockyard or space station orbits Moclus. On March 2420, The Moclan government upgraded all Union Exploratory-class vessels and above with enhanced weaponry at the dockyard.[24]

The physical appearance of Moclans was designed by special make-up effects artist Garrett Immel, based on a rough sculpture of Bortus made by Howard Berger, then the make-up department head.[26]

Moclan clothing was designed by wardrobe designer Joseph Porro. When Porro learned that the Moclan skin would be similar to burnt hombre and that planet Moclus's surface was ruddy and red, he shifted the clothing color palette to blacks, grays, and reds to "flatter" the make-up.[27] 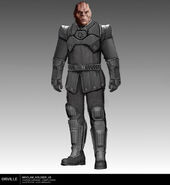 A concept sketch of a Moclan soldier by the show's wardrobe designer Joseph Porro and illustrator Luca Nemolato. Note the older spelling of Moclan as Moclam used during development. 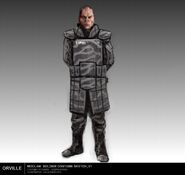 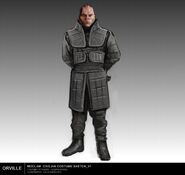 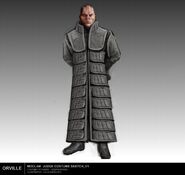 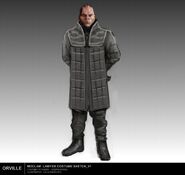 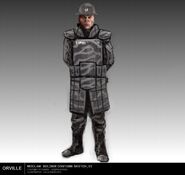 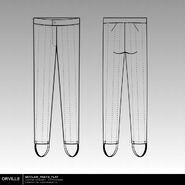 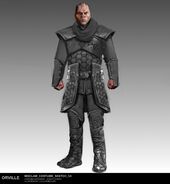 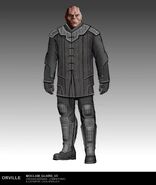 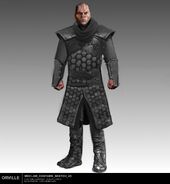 The first information about the Moclan species came in July 22, 2017 at the San Diego Comic-Con when Peter Macon (Bortus) revealed that Moclans are an all-male species who urinate once per year.[28] Building up to the series premiere, the Moclan species became a favorite topic of the cast in interviews.

The Moclan language, including its writing system, was created by the show's futurist Taylor Faulkinberry.[29]

The Moclan writing system was reprinted with an English transcription by Jeff Bond in the book The World of the Orville.[30] The consonants more or less correspond with English's, with two added letters; however, their phonological values are undetermined: a, b, c, ç, d, f, g, h, j, k, l, m, n, ñ, p, q, r, s, t, v, w, x, y, z. The vowels have plain and umlauted versions (except for the unusual letter ǽ), and are undetermined phonologically as well: a, ä, ǽ, e, ë, i, o, ö, u, ü. Additionally, there are characters for ? and . as well.

According to Faulkinberry, the language is written starting in the top left in a spiral (resembling a snail shell). A bold or thick line tells the reader the direction of the script.[31]

Some Moclan texts were "written" by graphic designer Michelle Peters for display on the walls,[32] such as in Doctor Gulnar's office in the Environmental Simulator program Bortus 931.[33] The inscriptions read Moclus.

According to visual effects supervisor Brandon Fayette, the Moclan fleet is designed around "triple-split, bifurcated rings" (rings referring to a ship's quantum drive, which encompasses a ship to fold space around it).[34]

According to the supervising sound editor Jon Greasley, the sounds of Moclan ships were updated for Season 2, receiving a "more muscular" feel.[35]